ANZAC Day... The long Parade of ever-thinning out, ever-older returned servicemen... The marching bands, some in Scottish kilts with bagpipes, playing "Waltzing Matilda"... The Last Post... The Ode... The old hymns they sing every time... You used to see the very last of the WWI Diggers being driven by slowly in special cars, but I think all have died*, and the WWII veterans are in their eighties now; the Vietnam Vets are middle-aged and older; Australian troops fighting in Iraq and Afghanistan must not be forgotten. Lest we forget.

I had planned to get up long before dawn, and drive into town to go to the Dawn Service at King's Park, but a combination of factors forced a change of plan. We have Mass for St Mark's Day at 9am at the Pro., and I hope the road closures for the Parade won't block me from getting in and parking close by! After Mass, I'll go to the Parade and the late morning Service down by the foreshore.

Fr Rowe told me that he had the option (! - in the old rite! yes: by special decree of the Sacred Congregation of Rites, 23rd June 1961) to say a Requiem today rather than the festal Mass, and in the new rite in Australia (and N.Z. I suppose) the feast of St Mark is moved to tomorrow, so that a Requiem with proper texts and prayers can be fitted in today, in memory of all those fallen in war, "who gave their tomorrow so we could have our today". As I use the modern Office, today I'll do the Office of the Dead, and keep St Mark for tomorrow.

As for the Litanies, I can only assume Fr plans to say them privately.

I append some pictures sent me that were taken by Fr Bernard, when he came with me to the ANZAC Day Parade in Melbourne, back in 2006; it took 4 hours for all the marchers to pass by... 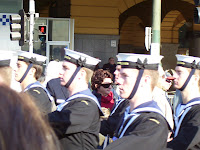 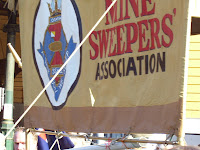 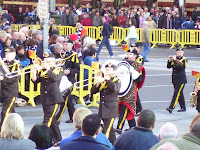 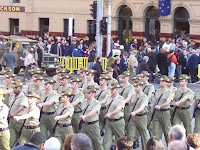 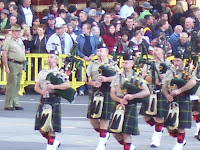 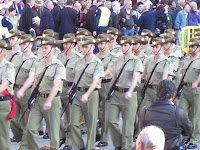 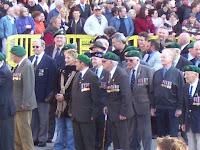 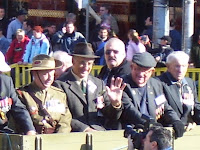 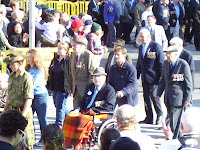 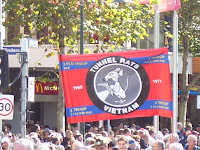 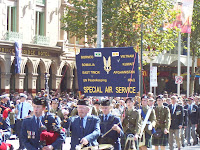