Yesterday I heard Mass at St Canice, with about 60 others including choir and servers; Fr Quinn reflected on the wonder that even the tiniest new-baptized child is sharer in the Divine Life of the Trinity: such the goodness and prodigality of God!  The choir was boosted by Steven Smyth from Sydney, who also played the organ with aplomb; we sang Missa XI (Orbis factor) and Credo I, while the Proper was well-executed.  Mass took a little over an hour, beginning a little after 11.30 am as Father heard confessions beforehand.
Here are some photographs I took before and after Mass (I felt uncomfortable taking pictures during the Dread Sacrifice): 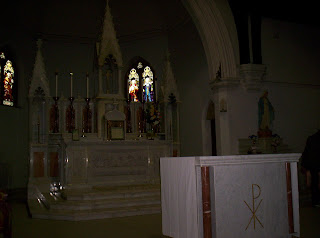 (The original high altar being readied for Mass; note the atypically handsome fixed freestanding altar later installed in front of it.) 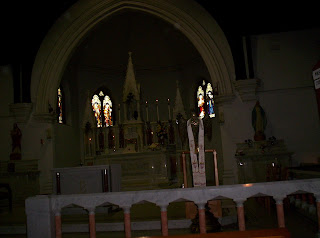 (The big six are lit; it's time to Introibo... note the side altars, Our Lady's being used as the credence, and the high ambo with its brass eagle readied for preaching...) 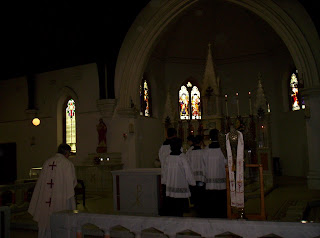 (The servers walk a little fast for Father!) 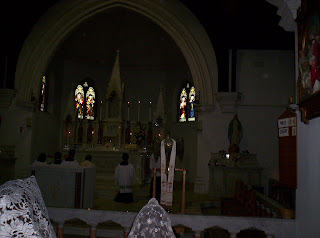 (My view of the priest and his ministers genuflecting upon their arrival at the altar step.)
Posted by Joshua on Monday, June 08, 2009