The Te decet laus is a short doxology that I use in my prayers fairly commonly; in the West, it is known only in the Monastic Rite, where it is used at Matins, after the Te Deum, followed by the Gospel of the day (with response Amen), have been chanted - it is as it were an ascription of praise to the Trinity for the Holy Gospel.  In the Byzantine East, on the other hand, the Te decet laus is used extensively; at Matins (Lauds), Vespers and Compline, it occurs at the very end of the collection of psalm verses normally prayed following on the Greek recension of the Gloria in excelsis (although at festal Matins the Te decet laus is not used), or as a separate prayer, called the Kataxiôson after its first word (familiar in the West as Dignare Domine die isto/nocte ista...).
Herewith, the Te decet laus, first in its (original) Greek, and then in its Latin version:

Σοὶ πρέπει αἶνος, σοὶ πρέπει ὕμνος, σοὶ δόξα πρέπει, τῷ Πατρὶ καὶ τῷ Υἱῷ καὶ τῷ Ἁγίῳ Πνεύματι, νῦν καὶ ἀεὶ καὶ εἰς τους αἰῶνας των αἰώνων. Ἀμήν.
(To you praise is due, to you song is due, to you glory is due, Father, Son and Holy Spirit, now and for ever, and to the ages of ages. Amen.)
Te decet laus, te decet hymnus, tibi gloria: Deo Patri et Filio cum Sancto Spiritu in sæcula sæculorum.  Amen.
(Thou art worthy of praise, thou art worthy of hymn[s], to Thee be glory: to God the Father and the Son with the Holy Ghost, world without end.  Amen.) 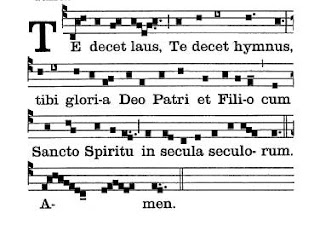 Pretty obviously the Scriptural allusion is to Te decet hymnus, Deus, in Sion, et tibi reddetur votum in Jerusalem (Ps 64:2), well-known to Catholics as the verse of the Introit of the Requiem Mass: "A hymn, O God, becometh Thee in Sion, and a vow shall be paid unto Thee in Jerusalem: O hear my prayer, all flesh shall come to thee " (continuing with the third verse).
Posted by Joshua on Saturday, June 13, 2009