Alongside its three mottoes – Requies (Rest); Dormire, Requiescere, Somniare ("To sleep, to rest, to dream", or, more poetically, "To sleep, perchance to dream"); and Dormire est orare – the Order of the Dormition of the Blessed Virgin Mary, that most retiring religious Order of Canons Regular contemplatives, is also blessed with   heraldic bearings most fitly representing its proper charism. 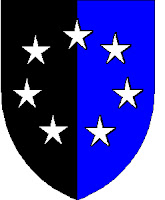 Informally, these arms may be referred to as "black and blue and surrounded by spinning stars", but, as this seems somewhat unseemly in the vernacular, the correct blazon in the language of heraldry is instead "Party per pale sable and azure, a circle of seven mullets argent".  It will be at once evident how apt this is: for the black stands for sleep, the blue for Our Lady, and therefore the two together represent her in her Dormition, under which title she is primary patroness of this, her Order.
As for the seven stars, the three upper mark the Three Days' Sleep-in-Death of Our Lord in the Holy Sepulchre, while the four lower represent the four days St Lazarus (secondary patron of the Order) spent in the tomb; or again, all seven stars in a circle represent both the Seven Sleepers of Ephesus, secondary co-patrons of the Order, and also that all seven days of the week, the Friday, Saturday and Sunday Our Lord spent in the Tomb, and the Monday through to Thursday that it is posited Lazarus spent entombed, ought be consecrated to sleep: hence the term seven-sleeper, Siebenschläfer, for a zealous Dormitionist.
Again, as sable is related to Saturn, azure to Jupiter and argent to the Moon, there may be found in these arms an allusion to the myth of Endymion, at the behest of Selene lulled to endless sleep by Zeus or Jove; and sleep, as all men know, is somewhat related to a melancholy temperament, as represented by the influence of Saturn.  (It was, after all, common in mediæval times and the Renaissance to produce armorial bearings with such planetary and astrological significance.)

Sometimes – but by no means always – this shield may be accompanied by one or other of the Order's mottoes; and, especially in Baroque woodwork (as in the choir of Dormitionist churches), there may be carven supporters of the shield: to dexter and sinister, a bear and a cat, dormant (with head resting on fore-paws).
Posted by Joshua on Wednesday, June 15, 2011