I heard Mass this morning; to-morrow morning, however, after stopping off to pay my respects at my father's grave (it being the third anniversary of his death - do spare a prayer, gentle reader, for him), I will be driving south to the Tasman Peninsula for a few days' break. The weather forecast is not promising, unfortunately.
Posted by Joshua on Monday, September 30, 2013 No comments:

Please join with me in giving thanks to Almighty God for the ordination to the priesthood of Fr Brennan Sia, in Perth, Western Australia. What David said by the Holy Ghost of Christ now applies to him: Tu es sacerdos in æternum.

I met Fr Sia while I was living in Perth some years ago, and last ran into him in Rome... While I was unable to attend his ordination on Friday night, he very kindly accepted his first Mass stipend from me, and offered Mass for my intentions to-day.

I am sure he will be most grateful for every prayer that he be a wise and holy priest:

O God, who made your Only Begotten Son eternal High Priest, grant that those he has chosen as ministers and stewards of your mysteries may be found faithful in carrying out the ministry they have received.
Lord our God, who in governing your people make use of the ministry of Priests, grant to these men a persevering obedience to your will, so that by their ministry and life they may gain glory for you in Christ.
O God, who have willed that your Priests should minister at the holy altar and serve your people, grant by the power of that sacrifice, we pray, that their labours may constantly please you and in your Church bear that fruit which lasts for ever. Through Christ our Lord. Amen.

—Roman Missal, 'Masses and Prayers for Various Needs and Occasions', I. 6., alt.
Posted by Joshua on Sunday, September 29, 2013 No comments:

Dad's footy team – and mine – is Hawthorn: the AFL Grand Final is about to start, "Up there Cazaly" has been sung, and the Hawks stand ready to defeat Freo.

Thank God that Cazaly himself, when coaching Hawthorn sixty years ago, gave them their present nickname – prior to that, they'd been the Mayblooms...

I predict Hawthorn will win, by the skin of their teeth: the Fremantle Dockers are tough. Up the mighty Hawks!

UPDATE: the Dockers just didn't have it in them; Hawthorn won by 15 points. Excellent!
Posted by Joshua on Saturday, September 28, 2013 No comments:

My old friends the Dominicans liked to refer to St Francis as "Holy Uncle Frank". Clearly, something of the same resonated with a certain Jesuit earlier this year... And as I'm in a Franciscan parish these days, and one whose parish priest is getting on a bit (dear Fr Allan is eighty), I ask readers to join in a Novena to St Francis, with the intention that, when (hopefully none too soon!) our parish priest retires, we be given a new one (not a foregone conclusion, given the local shortage of clergy). An indefatigable parishioner suggested this to me yester-day: the Novena begins today, and concludes on the 3rd of October, the day of the death of St Francis.

What text? I suggest the traditional form of the Transitus: Psalm 141, Voce mea ad Dominum clamavi, which was prayed by St Francis as he lay dying – indeed he gave up the ghost as he recited the last verse, "Bring my soul out of this prison, and then I shall praise thy name" (and how wonderful a memory it is to think that I looked at that very spot when in the Basilica of St Mary of the Angels at Assisi a year or so ago) – with the antiphon O sanctissima anima; five Pater's, Ave's and Gloria's ("cross prayers" said with arms outstretched); the antiphon Salve, sancte Pater (which we sang last night at Compline and Benediction), with versicle and collect; and a final "Lord, hear my prayer" and "Let us bless the Lord", praying that He bless us by granting our request: 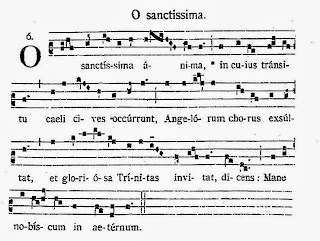 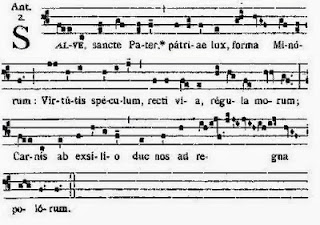 The first antiphon and the versicle are, of course, derived from the Office of St Martin of Tours, which itself drew from the Life of St Martin compiled by Sulpicius Severus: