The Other Chants of the Mass of St Philip Neri

Having in my last post identified the musical source for the chant setting of the Offertory for the feast of St Philip Neri, I thought next to mention the melodic origins of the rest of the Proper of his Mass.

Likewise, the Gradual Venite is taken without change from the Mass of the 7th Sunday after Pentecost.

I have not yet found a source for the music of the second Eastertide Alleluia and its verse Concaluit.

Most interestingly, the Communion Cor meum is set to a very prominent chant – that of the Communion Viderunt of the Mass of Christmas Day. Doubtlessly this conveys something of the joy whereby the heart and flesh of such a saint do ever exult in the living God.
Posted by Joshua on Saturday, May 28, 2016 No comments:

Musical Source of the Offertory for St Philip Neri 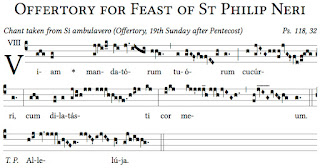 Having checked through the Offertoriale, it is clear that the chant for the Offertory for the feast of St Philip Neri is taken from that of the 19th Sunday after Pentecost, Si ambulavero, thus:

Twenty-Nine Years in the Church of Rome

Today being Pentecost Sunday, I motored down to Hobart (as I usually do each first day of the week) and M.C.'d the Missa cantata at Sacred Heart. Today being Pentecost Sunday, I mark the anniversary of my Baptism, Confirmation and first Communion on this same beloved feast in 1987. While I have perhaps little to show for twenty-nine years in the Church of Rome, that is because of my sins and backsliding: but grace is greater than all, so I must give all glory to God for having blessed me so abundantly with the grace of the Holy Spirit in Christ Jesus our Lord. Te Deum laudamus!
Posted by Joshua on Sunday, May 15, 2016 1 comment: