One should always act as if all depends on one’s own efforts, and pray as if all depends on God: this is based on the truth that God, the Primary Cause of all, deigns to work through a multitude of secondary causes, and all such causes are true causes of their ultimate effects: I exist because of God, but also because of my parents, my grandparents, and so on.

We should also always have hope and trust, both supernatural and natural: so we do not give in to paranoia, nor overcritically distrust what is told us, but prudently and rationally weigh up what we learn. For this reason, I hope and trust that the current coronavirus outbreak, though serious, will not lead to “deadcarts and plague pits”; still, while praising all medical staff who are striving to contain and control this new disease, we should also pray to God that he save us from pestilence.

The following antiphon and versicle are taken from the Cantuale Romano-Seraphicum, no. 122, p. 136f. (I have corrected what is given at Gregobase by reference to this book, which basically meant two notes had to be moved up one step each.) Its Critical Epilogue notes that this is a Prose traditionally sung by Franciscans against the pest or plague, and its music derives from two older sources, a prose and a trope. According to other sources, supposedly this anthem was taught by St Bartholomew to a nun at a convent of the Poor Clares at Coimbra in 1317... whatever of this pious account, it ought be noted that the poetic references in the antiphon to Our Lady as Star of the Sea, and thus to her as a glorious Star able to deliver us from the malign influences of the stars, do not commit us to a belief in astrology!

The Collect following (addressed to Our Lord, and having a rather unusual Gallican ending) is taken from old prayer books I have collated. UPDATE: I have given the slightly abbreviated text of the collect as used in the 1823 Breviarium Romanum used by the Capuchins. 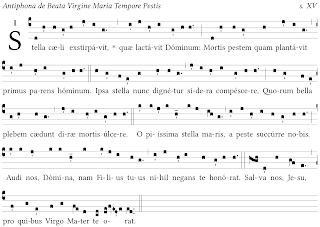 Antiphon.
The star of heaven, who nourished the Lord, rooted up the plague of death which the first father of mankind planted: may that same star now deign to counter the constellations whose strife strike down the people with the ulcer of a terrible death. O most pious star of the sea, save us from the plague. Hear us: for thy Son honoureth thee, denying thee nothing. Save us, Jesus, for whom the Virgin Mary prayeth to thee.

V. In our every tribulation and anguish.
R. Succour us, most loving Virgin Mary.

Collect.
God of mercy, God of pity, God of pardon, who hadst pity on the affliction of thy people, and didst say to the Angel that slew thy people, Hold thy hand: for the sake of the love of that glorious Star, whose precious breast thou didst so sweetly suck, against the poison of our faults; supply the help of thy grace, that we may securely be delivered from every disease and unprovided death, and may mercifully be saved from the inroads of all perdition, through thee, Jesus Christ, the King of glory, who livest and reignest world without end. R. Amen.
Posted by Joshua on Saturday, February 01, 2020 No comments: