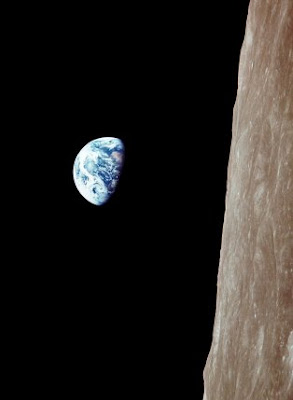 (I should have posted this on Christmas Eve, since I listened to what I'm about to describe then, but only seeing the full Moon from my window tonight reminded me to blog about it.)
Who remembers the 1968 Men of the Year?  They were the crew of Apollo 8, the three men first to leave near-Earth orbit, the first to circumnavigate, the first to orbit the Moon, the first to behold the whole Earth from afar, the first to see Earth-rise over the lunar desolation (still a most awe-inspiring sight; see this video from Kaguya).  They attained lunar orbit on Christmas Eve.
Their Christmas Eve broadcast from lunar orbit was heard by perhaps a quarter of humanity; and, looking back across the gulf of space some 300,000 km from Earth, they beheld that place where everyone who ever lived has lived, where everything that ever happened, happened, and saw it as the unique, precious, fragile jewel of life in the cosmos.  Their response?  They read Genesis i, 1-10.
Hear it again, here.
Posted by Joshua on Tuesday, December 25, 2007