The Christ (and Poems) of St John of the Cross; Confitemini Domino 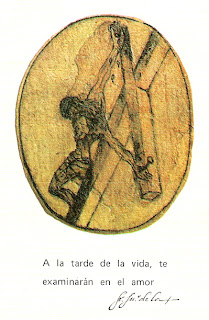 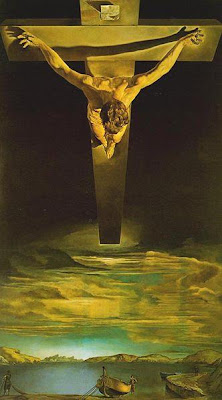 More on St John of the Cross's Sketch of Christ Crucified
Reference to the edition of St John's collected works in my possession reminded me (p.37f) that the sketch he drew of Our Lord Crucified was based a vision  of his: it shews Christ from the vantage point of the Father, looking down in love and acceptance of the sacrifice freely made by his Son, brought to the uttermost depths of sorrow and suffering for sinful man's sake.
The same text further reminded me of Dali's famous painting, apparently inspired by this image: without wishing to violate copyright, I give for reasons of comparison with its prototype a low-res. image thereof.
His Poetry
For my penance last night – though not I think sufficiently taken to my heart – I read over some of St John's poems in English translation, and was again moved by them, especially by his "Romance on the Gospel text 'In principio erat Verbum,' regarding the Blessed Trinity" (from which comes, as part 9, the text "On the Birth", below).  In the translations, familiar to me from the modern Office, they long past struck me, stuck in my mind, and bear repeating:
With the divinest Word, the Virgin
Made pregnant, down the road
Comes walking, if you'll grant her
A room in your abode.
– this one a good Advent meditation (tr. by Roy Campbell); and this ditto, and more so for Christmastide nearly upon us (tr. by E. Allison Peers):
When the ancient dispensation
It's predestin'd course had run,
Straight from out His bridal chamber
Came the Bridegroom, God the Son.
Once on earth, with arms extended
He embrac'd His heav'nly Bride,
And His blessèd Mother laid Him
In the manger, at her side.
All around that helpless baby
Animals were standing by;
Men sang songs of glad rejoicing;
Angels join'd their songs on high,
Celebrating the betrothal
'Twixt the Bridegroom and the Bride,
While th' Almighty, in the manger,
As an infant, wept and cried.
Gems these tears which human nature
Brought to the betrothal-rite,
And the Maid was lost in wonder
As she witness'd such a sight.
Man was full of joy and gladness;
God was weeping, weak and lone.
Ne'er before throughout the ages
Had so strange a thing been known.
(What is so strange is not merely God's "weeping, weak and lone" but man's "joy and gladness" – for before the saving Incarnation, first act of the drama of salvation, the Bride – all humanity to be saved – was filled with longing and sighing, sadness and weeping at her unredeemed state and the promise afforded by hope.)
Returning to Kavanaugh and Rodriguez's translation, here is the last bit I read, St John's Suma de la Perfección:
Forgetfulness of created things,
remembrance of the Creator,
attention turned toward inward things,
and loving the Beloved.
Confitemini Domino
Confitemini Domino, quoniam bonus: quoniam in sæculum misericordia ejus.
As mentioned earlier, it is always good to go to Confession.  As a curious, wise old Dominican once said, all sacraments are primarily acts of worship, and so (citing the opening of what we would now call the penitential rite in the traditional Dominican Mass) the Sacrament of Penance rightly consists in confessing unto the Lord, confessing that the Lord is good, and that His mercy is for ever sure.  Confiteor, "I confess", has this double meaning in both tongues: to declare one's own wickedness, and to proclaim God's always-greater goodness.
Good to be shriven again.
I must remember what I know at heart: to love my neighbour is to respect him, and act accordingly: "Owe no man any thing, but to love one another... The love of our neighbour worketh no evil.  Love therefore is the fulfilling of the law."  (Rom. xiii, 8-10.)  Too often I do not act with charity.
Posted by Joshua on Saturday, December 15, 2007