Well, I've survived my first Novus Ordo Sunday Mass for six months or so!
(I say Sunday Mass, because weekday Masses are much more bearable; since being able to attend the Latin Mass in Perth, I've averaged about 2/3 extraordinary form, and 1/3 ordinary, making it to Mass about 5 days a week.  But Sundays have been all Trad. – except once while travelling on holiday, when I couldn't get to Mass at all, and once when my parents visited and Mum wanted to go to the local parish.)
Lest I appear a pharisaical grouch, I must say I appreciate that the beauty of holiness is substantially present at all Masses, insofar as Christ himself is present.  It is just that suburban mediocrity does tend to sadden one when it makes what should be so thrilling and sublime appear stilted and uncomprehended.
Tonight's well-meant music got me down.  Instead of lovely Advent hymns and some reasonable Mass setting, we had very generic musak, overly hyped up with a plethora of instruments, and a strangely folksy Mass setting that I noticed few sang along with.  Gresham's Law applies to Church music as well as to money: the bad drives out the good.  That said, the sermon was quite good for the priest – known to me – who does try his best; he even talked in praise of the new encyclical Spe salvi.  Little things, like poor reading, annoying wreath-lighting, etc. get me down, but at least now I am much more philosophical about it and no longer get so angry – going to the Traditional Mass has given me a safe anchorage, so that I don't get steamed up about liturgy as much any more. 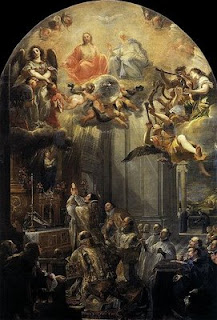 But of course the sacred mysteries were truly confected, so only in some accidents was the Holy Mass less than entirely enthralling.  Indeed, one thing I very much like in the ordinary form of Mass is the chance – be shocked, ye traditionalists! – to receive Our Lord under both species.   Unfortunately, as a reaction to irreverences connected with the proffering of the chalice to communicants, many Latin Mass types react as if to drink therefrom were somehow sinful, which is the sort of nonsense that rightly offends other Catholics.
FWIW, I have been given communion from the chalice in the Dominican Rite: I was serving a private Mass, and greatly to my surprise, after being fed with the Bread of Life, the priest turned back to the altar only to come to me again, bearing this time the chalice, which he administered to me that I might receive Christ's Holy Blood.  Afterwards, I asked him about this, and he replied that, though he mainly said the old Mass, he knew that the giving of communion under both kinds was orthodox and called for by Vatican II, and so had proceeded to do so.  Some Traddies might consider it mortally sinful so to do, but I think I disagree.