Over at Pastor Weedon's blog, mention of the Epiphany Magnificat anthem Tribus miraculis arose.  Since (in the Novus Ordo at least) tomorrow is the Feast of the Lord's Baptism (since it's a Sunday, in the Old Rite the Holy Family trumps it, unfortunately), it seems good to mention this very impressive text, which links the three miracles commemorated in a kind of triptych: the Adoration of the Magi, the Baptism of the Lord, and the Wedding Feast at Cana – today, the sacred Liturgy proclaims, all these wonders took place, to our great and endless comfort: "If today ye hear His voice, harden not your hearts..." (Ps 94). 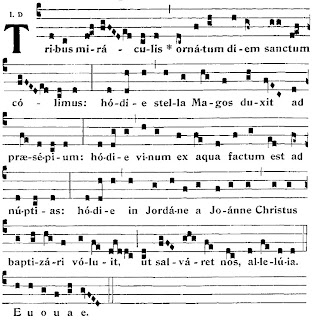 We honour this holy day adorned with three miracles:
today the star led the Magi to the manger:
today wine was made from water at the nuptials:
today in the Jordan Christ willed to be baptized by John,
that He might save us, alleluia.
Palestrina's setting of this anthem is available here, thanks to the St Gregory Society.
NB St Augustine, I recall, and St Bede, subjoin a fourth miracle – the multiplication of the loaves and fishes – to the Epiphany, and the Mozarabic Rite adds a fifth, a renewed commemoration of the Nativity of the Lord: in all cases the miracles are considered as manifestations of the Divine saving power of Christ.
Here is the solemn Blessing for the Epiphany, as bestowed in the Mozarabic Rite before Communion (Missale Mixtum, col. 238f):
Jesus Christus Rex noster qui profanum Regem sua nativitate terruit:
ipse in vobis cum suis virtutibus regnet.
R/.  Amen.
Cujusque signum stella radiante Magis apparuit:
ejus vos gratia sine fine clarificet.
R/.  Amen.
Det vobis spiritualem intelligentiam:
qui aquarum naturam vini in suavitate fecit esse saporem.
R/.  Amen.
Et qui populorum millia exiguo panis fragmine satiavit:
corda vestra doctrine sue alimento locupletet.
R/.  Amen.
Conferens vobis veram innocentiam:
qui Spiritus Sancti tranquillam simplicitatem demonstare voluit per columbam.
R/.  Amen.
Quod ipse prestare dignetur:
cujus regnum et imperium sine fine permanet in secula seculorum.
R/.  Amen.
(May Jesus Christ our King, Who terrified the profane King by his birth:
Himself reign in you with his virtues.
Amen.
And may He Whose sign appeared to the Magi as a radiant star:
by His grace make you to shine without end.
Amen.
May He give you spiritual understanding:
Who made the nature of waters to be the flavour of wine in sweetness.
Amen.
And may He Who satiated thousands of people with scanty fragments of bread:
enrich your hearts with the food of his teaching.
Amen.
Conferring on you true innocence:
Who willed to shew forth the tranquil simplicity of the Holy Ghost by a dove.
Amen.
Which may He deign to grant:
Whose reign and empery abideth without end unto the ages of the ages.
Amen.)
Posted by Joshua on Saturday, January 12, 2008