In a Country Churchyard

Late this arvo I'm heading down to Hobart to visit friends.  On the way, however, I do hope to stop as is my wont at St Michael's in Campbell Town (just turn off the main road down King St), about 70km along the Midlands Hwy, that I may visit the three priests' graves in the churchyard there, and say a De profundis for their souls, with the proper collect:
Deus, qui inter apostolicos sacerdotes famulos tuos N., N., et N. sacerdotali fecisti dignitate vigere: præsta, quæsumus; ut eorum quoque perpetuo aggregentur consortio.  Per Christum Dominum nostrum.  R/.  Amen. 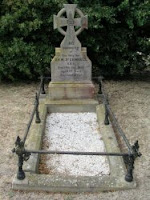 The three repose in a very clerical select graveyard of their own (the laity are kept elsewhere), and are quite noteworthy, especially the first-buried, the Very Reverend Dom Maurus (Daniel Vincent) O'Connell, O.S.B., quondam Dean of St Mary's Cathedral, Sydney, and first Rector of St John's College (where a friend of mine now holds his place), died 12th September 1901: for he is the first Australian-born priest, born in 1825, the son of early settlers near Campbell Town, who became a Benedictine in Sydney in the early days under Polding when the dream was for a monastic clergy for Australia.  Howbeit, he ended his days where he began them, and is buried by the present church (built 1857) where mayhap he offered many a Holy Mass. 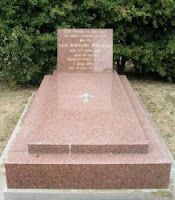 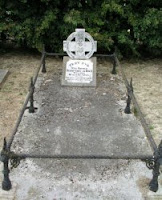 Likewise, the other two sleepers have local connexions: the middle Father was a missioner (an Oblate of Mary Immaculate, I recall [wrongly! - see below]), who died while on preaching rounds in the area; the last-interred [not a Monsignor, as I'd thought] was the last parish priest of Campbell Town, having held that post for decades and dying in the 1980's.  (Nowadays, the parish has been merged with others, and has Mass on Sundays twice a month.)
Very annoyingly, I cannot recall these last two priests' names!   That's why I hope to call by.
[Update: the missioner was Fr "Henry" (sic; lege Henri) Chetail, "M.S.H." (sic; lege M.S.C.), died 15th March 1904; the P.P. was Fr Leo Bernard Kirkham, died 11th April 1985.]
(Photos pinched, I hope understandably, from the relevant page of Australian Cemeteries.)
Posted by Joshua on Saturday, January 05, 2008