Much sadness, many tears: our beloved dog, Suzie, is dead, aged about eleven and a half (or eighty-odd in dog years). Ever since surgery last year, which gave her a bit less than an extra year of life, she struggled on, gradually her kidney function failing; we took her to the vet – her least favourite place – on Thursday morning to be put on a drip for several days to attempt some detoxification, but when we brought her home on Sunday afternoon she was definitely worse, much worse than when we had visited her at the animal hospital. 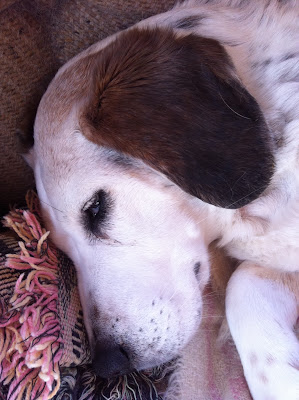 Suzie sleeping on the couch with her blankets,
about two hours before her death.

To-day she was very low, and it was obvious she was in final stage renal failure. I had hoped she might have one last happy day at home; after many hours sitting with her, patting her and weeping as she slept and occasionally stirred – to take a little morsel or a drink, to wander out to the garden one last time, to bark one last time – the vet kindly came on a house call to administer the final injection, just at the time of the evening Angelus. I sat next to her and patted her as she died.

We have the dominion over the animal kingdom; and what a bitter thing it is to wield; and yet, what is that to God's governance of all – what an insupportable burden, but for Omnipotence: thus the Jewish tale, whereby as Moses and the Israelites rejoiced, the Lord wept for the Egyptians he had drowned in the sea. To have the power of life and death is most bitter; how could man dare wield it over his fellow, when over man's best friend we cry so?

Poor Suzie, dear hound! Last week, I had asked my parish priest (a kindly Franciscan, understanding of the bond of love that unites parishioners to their pets) to commend dear Suzie to St Francis, and I certainly asked him, St Roch, St Hubert, St Dominic and Our Lady for their prayers, yes, even for this very humble creature, whose time had come, that she might not suffer in distress and pain, and asked God for this blessing.

Farewell, most faithful dear one! You were always loving. As her body, so her spirit, a sweet and gentle canine soul, has come to the time of dissolution. Animals, unlike men, have no immortal soul; but whatsoever the good Lord brings into being is some reflection of the divine beauty, which abides always. In God all things have their eternal exemplar, their origin and their end.
Posted by Joshua on Monday, October 08, 2012