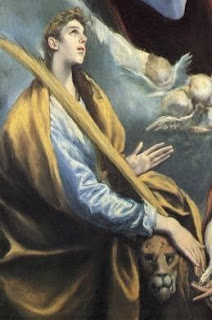 To-day we keep the feast of St Martina, Virgin & Martyr (at least if one is observing the Extraordinary Form, as by reading the 1962 Breviary); and when last Sunday I worshipped with the Russian Catholics, they were keeping the memory of St Tatiana, Martyr at Rome (whose feast occurs on the 12th of January, which was the date according to the Julian Calendar).  I thought to find out a little more about them, particularly the latter, who was unfamiliar to me, and thereby hangs a tale.
First, St Martina: apparently the evidence for her early cultus is obscure; Pope Donus (remember him?) dedicated a church to her in the Roman Forum in 677, as the modern Martyrology notes on this day (30th January, n. 3 and reference in its index), and in 1634 her relics, alongside those of SS Concordius, Epiphanius and friends, were uncovered in a crypt in an old church (the same one dedicated to her, by then having decayed and therefore being rebuilt): moved by this, Pope Urban VIII, then gloriously reigning, had the church (her church, known by this point as Santi Luca e Martina) repaired, and ordered her Office inserted into the Breviary, with special hymns newly composed by himself.  Their Latin I found very hard, so I looked them up and here append them with a translation courtesy of an old book found transcribed online...

1. "Praise, Romuleian citizens [ i.e. of Rome, founded by Romulus], the illustrious name of Martina, praise her glory; celebrate in song a Virgin rendered illustrious by her merits; sing a Martyr of Christ."

2. "As she was born of distinguished parents, she lived amid pleasures, amid the fascinating allurements of luxury, and she abounded in the rich gifts of a prosperous house."

3. "But despising the comforts of life, she dedicates herself to the Lord of creation, and with a lavish hand she distributes her riches among the poor of Christ, and seeks for herself the reward of the Blessed."

4. "Neither the agonizing hook, nor wild beasts, nor the rods with their painful wounds shake her constancy; thereupon Angels descend from the abodes of the Blessed and strengthen her with heavenly food."

5. "And even the lion, laying aside his savage nature, with friendly gaping jaws lays himself down at her feet: thee, at length, Martina, the sword delivers up to death and enrolls thee among the hosts of heaven."

6. "The altar which smokes, redolent with the odors of incense, unceasingly invokes thee with prayers, and it destroys and annihilates by the omen* of thy name baneful idol-worship."

[* Martina means "warlike" - her warfare was against idolatry, which war she waged by prayer.]

7. "O God, Three and One, Thou who dost mightily assist the Martyrs, drive far from us dangerous pleasures: grant to Thy servants the light wherewith Thou dost graciously bless their souls.  Amen."

Hymn at Lauds and Vespers

1. "Protect thy native land and give to Christian nations the repose of holy peace: banish the din of arms and dreadful wars to Thracian fields [i.e. far away]."

2. "And uniting the armies of kings under the banner of the Cross, deliver Jerusalem from bondage, and as an avenger of innocent blood, utterly destroy the hostile power [of the Turks]."

3. "Thou, our pillar of strength, our illustrious ornament, behold the benevolent disposition of our hearts; graciously accept the prayers of Rome, who in a loving manner sings thy praises and honors thee."

4. "O God, Three and One, Thou who dost mightily assist the Martyrs, drive far from us dangerous pleasures: grant to Thy servants the light wherewith Thou dost graciously bless their souls.  Amen." Second, St Tatiana: while the Byzantines keep her memory on the 12th of January, the modern Roman Martyrology makes no mention of her, again evidence of her early cultus in Rome seems hard to find, and it is even suggested, going on a great similarity between their Acts, that she and St Martina may be one and the same!  (She too, like St Martina, cast down idols by her prayers, was tormented but converted her very torturers by her miracles and constancy, thrown to a lion who refused to eat her, and finally suffered martyrdom by the sword, at Rome in the reign of Alexander Severus.)  Whatever of this skepticism, Tatiana is so popular among the Slavs that she is accounted Patron Saint of students, and her feast day is a public holiday in Belarus, Ukraine and Russia, called Tatiana Day or Student Day.
I do recall that at least her Kontakion was chanted at the Divine Liturgy, thus:

In your sufferings you shone brightly in the royal purple of your blood, and like a beautiful dove you flew to heaven, passion-bearer Tatiana. Therefore, always pray for those who honor you.