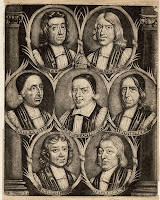 English history recalls "the Seven Bishops" of the Church of England imprisoned and tried for seditious libel under James II; and the nine English nonjuring bishops – five of them from among the Seven – who refused to break their oaths to the same James II when he was driven from his throne, thus refusing to swear allegiance to the new monarchs William and Mary.
Now, we may celebrate five bishops, who have announced their resignation from the Church of England and their resolve to enter the Catholic Church under the provisions of Anglicanorum cœtibus:
Of these, four are or were so-called "flying bishops", Provincial Episcopal Visitors, ministering to congregations opposed to the pretended ordination of women; while the last is a surprising late entry, and a former Anglican Bishop of Ballarat (1993-2003).  The Diocese of Ballarat is known to be very High – a late friend of mine told me that, as there was no Benediction at the Catholic Cathedral, he went to Benediction at the Anglican one instead!
God speed the Ordinariates to be established in England (and in the rest of the U.K., above all in Scotland, where a faithful remnant of the Scottish Episcopalians, themselves descendents of the Nonjurors, has made application to come in), in Canada, in the U.S.A., and here in Australia – including the Torres Strait.
Posted by Joshua on Tuesday, November 09, 2010

Well, I must say that David Silk is the surprise in this list. He was, as you acknoweldge, Bishop of Ballarat at one stage, and also president of the august society called the "Victorian Council of Churches". I very much enjoyed his company, whenever I had the opportunity. Of course, I was a Lutheran back then. Bishop Silk ordained my good friend Tony Bartel, who was once a Lutheran Pastor, and then an Anglican Priest, and now a Russian Orthodox layman.

Gosh. It almost makes one dizzy...